Surrounded on three sides by a two-storey portico with columns and pedestals, while it leans against the church on one side. It is accessed through an entrance with two high reliefs on the thirteenth century door jambs depicting St. Peter and St. Paul. At the centre of the cloister, there is a cylindrical pagan altar from the Roman period decorated with dancing figures that were chiselled away by the monks after its reuse. On the sides of the entrance, there are two symmetrical staircases leading to the first floor. The colonnade on the first floor, which is slimmer and lighter, was probably built later. In the loggia on the first floor there is a fresco representing the Ancajani family coat of arms, a rampant lion and more unintelligible remains from other frescoes. In the architrave of the door of a room connected to the refectory, probably the ancient kitchen, some signs have been engraved, presumably representing the passion of Christ. On the side adjacent to the church, a sundial was placed, presumably moved during restoration work in the 1930s.

On one side bordering the apse of the church, on the other side, there is a well and a steep staircase supported by massive pillars. On the entrance arch to the large cloister are the remains of a late Gothic fresco depicting the crucifixion of Christ, unfortunately it is impossible to distinguish the exact representation. 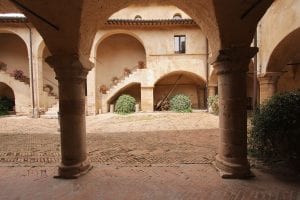 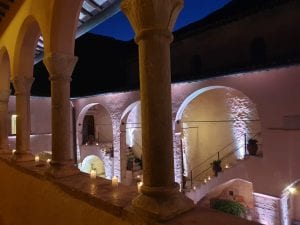 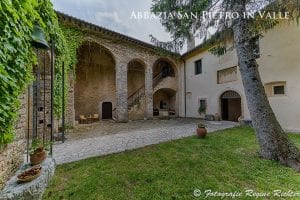